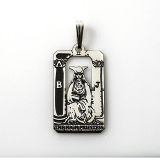 The Tarot is a system of both divination (foretelling the future or the circumstances of the present or past) and philosophy. It is said that after the burning of the great library at Alexandria, the scholars, mystics and philosophers created the system of Tarot so that the ancient wisdom could always be received. Tarot images represent the great archetypes in a manner that makes them open to understanding on many levels.
Wellstone Jewelry is proud to present the High Priestess Tarot pendant and earrings in finely crafted sterling silver.1"x.5".

​​Symbolism and Meaning of the High Priestess Tarot Card

A young woman sits on a throne holding a scroll labeled "Tora" meaning "law." On her breast is the sign of the meeting of heaven and earth, the Maltese cross. Her crown is the full orb supported by horns, the crown of the Mother Goddess Isis, who rules all things changeable, shown by the moon at her feet. Her power, upon which her throne rests, derives from the creative principle of duality, shown by the two pillars of light and darkness. To those who know and love her she dispenses the sweet fruit of the world itself, symbolized by the pomegranates.