The Tarot, The Lovers and The Devil


When the seers of ancient Egypt saw into the future and knew that the libraries of wisdom, accumulated at what later was called Alexandria, were going to be destroyed. they sat down together and created what we now know as the Tarot.

Many of the ancient mysteries are contained therein but one that is very deep but not much discussed is that of the Lovers card and the Devil card. These two cards hold a mystery, a subject that is much puzzled over and that has created controversy and some confusion. This small essay is an attempt at bringing some light on that subject. 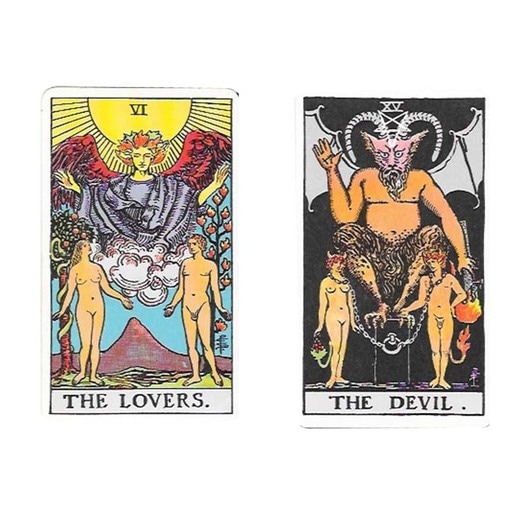 The two cards are similar,in fact one could say they are images of the opposites of the same subject. The subject of course is relationship, how two people may relate to each other.

In one we have the caption “The Lovers.” In the other we have: “The Devil.” Of the two, The Lovers, appears to be good, The Devil evil or perhaps maybe just “bad.” These might be the initial judgments. Those judgments are perhaps superficial yet because the subject is so weighty with prejudice and opinion, because they address what is often described or thought of as a moral issue, they bring forth an immediate and  premature judgment.

First of all let’s just look at the cards as a polarity. We can think of them as either a static polarity, one which is simply set forever in time and which demands a choice. Or we can see the polarity as one which is dynamic, ever changing, constantly shifting in the manner more like the way in which relationships actually function.

We look at The Lovers card. The Lovers in either case represents unconditional love. It is love blessed by heaven. The angel raises her wings in a gesture of blessing and approval. The sun is shining, its radiance full and pure. The mountain lies behind them, the pure waters flow around them,and behind them grow two trees. What can the trees be but the trees from the Garden of Eden, the Tree of Life and the Tree of Knowledge? The two lovers exist in the original garden, which lies outside of polarity altogether. They are Adam and Eve, first man, first woman. The time of The Lovers card is before the creation is complete, before temptation has entered into the world (though the snake waits in the tree behind Eve), before knowledge of good and evil. It is an illustration of love in the purest form, love without boundaries or confinement. The world has not yet been differentiated into polarities. It is a world that is existing timelessly but without completion. There are no children here in this garden. Between the lovers sits a cloud formation which can only symbolize a kind of ignorance or perhaps innocence.

Then we look at The Devil card. Now here we come to difficulty. Here we are asked to confront things which we perhaps have some problem in looking at. The Devil sits on his throne, a fat, half-human, half-animal giant of a figure with scary bat wings and strangely curved, downward pointing horns on which are mounted a five pointed star, also pointing downward. Unlike the sunlit world of the lovers, this world is dark, its only light being the fiery torch held by the devil. The Devil holds up his right hand, marked by strange figures, and it is difficult to tell whether he is drawing in or sending out energy. From his expression it seems not to be a gesture of blessing. His left hand, like the star and his horns, points downwards to the earth with the energy of fire. He is setting things into motion. As the Buddha said. “The world is a wheel of fire.”

The two figures in The Devil card are clearly the same figures as in The Lovers card yet they are different in telling ways. They are not free but bound in chains attached to the throne of the Devil. They are like the Devil as well. They have acquired horns and they have tails. The male figure has a red tail that appears to be on fire from the torch the Devil holds. The female’s tail is green and seems to hold or manifest a kind of fruit. It might be said even that she is fruitful. The figures stand in dark water, but not really in the water so much as on it. What a puzzle! So let’s look at it carefully. The five pointed star is the star of humanity with its energy directed downwards. In the judgment of many this represents a perversion of the proper place of humanity which “should” be directed upwards. The devil figure has bat wings which, of course, emphasize the darkness of that world and a kind of ignorance that is willful and quite different from the innocent ignorance existing in the garden. The two figures, interestingly enough, do not appear to be in pain. They simply are. They are in a common state of existence. But they are fully in the world, fruitful and aware, however much they may deny their bondage. Their union, though bound, is fruitful. There will be children in this world. This is a world where things change, where there is life and death, where pain is a distinct inevitability. Where the garden of The Lovers is an eternal stasis of bliss, the world of The Devil is one of turmoil, chaos and change.

Now we must look at the two cards and wonder if we must decide between them or if we must make peace with the polarity they represent. The Tarot was not created in the garden, it was not created outside of time. The Tarot is meant as a guide, a tool to understand the world as it is, not as it is supposed to be. For all that the Devil represents we cannot simply dismiss him any more than we can resist the world of love and beauty that is the garden. Both of these worlds exist simultaneously. They exist existentially and they exist in every relationship and especially those very close relationships that are defined by love, however we may define or not define that word.

Living in our world, the world of the dynamic polarity, we are not denied access to the blessings of the garden. We may indeed experience unconditional love. And yet . . . what can we say? Our relationships imply obligation. There are children here perhaps. There is money to be shared or not. There is work to be shared or not. There are choices to be made about authority and power. Surely we cannot deny that in the depths of bondage implied in the chains of the Devil Card is implied a possibility of dominance and exploitation. Evil has been introduced into the world. Yet it is also true that, for all of that, the sun may shine even brighter for the contrast, for the possibility of actual manifestation in a world of growth and change. And there is also still all of the beauties of the garden. However they may manifest as potentialities that actually appear for limited periods of time. Both polarities, The Lovers and The Devil are manifest. Nevertheless, in this world all phenomena exist for only a limited time.

In actuality we have little choice here. We cannot choose The Lovers over The Devil. We cannot choose exclusively freedom over any type of bondage. We have community. We have need of service. We have need of love and duty. And we have need of freedom. Yet all of these blessed qualities come to us mixed. And all of the negative qualities expressed in The Devil card also come to us mixed. With knowledge comes fruitfulness, the fulfillment of creation, of family, of art, of physical love and an even deeper spiritual love. Indeed much can be said for the wealth and richness of the Devil’s gifts.

We live in a world of duality. We can move beyond it through spiritual questing, through mediation, through the purity of unconditional love. Yet so long as we live in the body we will experience the pain and the bliss of constant change.

So there it is. As much as we may desire and seek the purity of the garden and the world where only unconditional love is manifest, we cannot reach it without acknowledging the boundaries of our physical, divided world. I think this is what the ancients are telling us in this gift of the two polarized cards. We cannot choose, we can only integrate and come to deeper wisdom through the trials and errors of manifestation.

I have not been a reader of the Tarot except for myself but, because I have worked closely with the cards in creating them as jewelry, I have been led into considerable thought about what they represent. I hope my words bring some light to the question of these two such mysterious cards and perhaps offer some light and help and perhaps wisdom.
Namaste.

The Lovers cards and The Devil's cards are available as pendants and earrings. Click here for the Tarot page.